We are in soccer tournament season, and with the World Cup approaching and the United States firmly seated in this year’s Group of Death for pool play, I found myself thinking about their odds of advancement. For that matter, what are any given team’s odds of advancement out of pool play if they don’t win their first game? Let’s get some facts and data behind that question with data from HTGSports.

Anyone who has been around youth soccer tournaments knows that there are a few possible group formats based on the number of teams who apply and are accepted. It doesn’t often end up that the format has a perfect eight teams: two pools of four teams, three pool games, a semi-final and final. In fact that’s a rarity. Sometimes there are six teams, or four, even 10 or 12. One thing that they all have in common is an important first game. From the vast data in HTGSports’ coffers here are some of the odds:

The graph below compares the results of game one between teams that advanced out of the group and teams that won the tournament.

The second graph shows the results of game one of pool play for the eventual tournament champions. 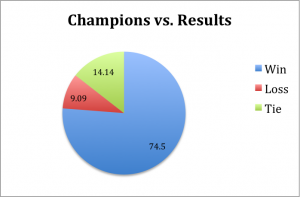 So as the US goes up against Ghana in the opener on June 16 and the odds of advancing out of group or winning the tournament are firmly against us, one thing is clear. Want better odds? Treat that first game as if it is a final.